Mountain View, CA – The Chen for Controller campaign announced today that it will begin airing advertisements on television and digital platforms across California today. The multi-million dollar statewide ad campaign will have a presence in every media market in the state.

“Californians want our next Controller to have the background, experience, and temperament for the job. Lanhee Chen is the clear choice for State Controller, and our statewide ad campaign will highlight the contrast before California voters in this election: between Lanhee and Malia Cohen, a financial disaster who didn’t bother paying her taxes, had a business license revoked, and was foreclosed on because she walked away from her home mortgage,” said Chen for Controller campaign manager Matt Ciepielowski.

Ciepielowski continued: “Our first ad, ‘Watchdog,’ introduces Lanhee’s background as a bipartisan problem-solver and asks a very basic question: If Malia Cohen can’t even manage her own finances, how can we trust her with ours?”

Lanhee Chen served in the presidential administrations of Presidents Barack Obama and George W. Bush. More than twenty newspapers across California, some of which haven’t endorsed a statewide Republican candidate in nearly a decade, have endorsed Lanhee for Controller.

Defaulted on her mortgage and walked away.

Cohen can’t handle her own finances,

We can’t trust her with ours.

I served under Presidents Barack Obama and George Bush.

I’ll be an Independent Controller.

Endorsed by over twenty newspapers across California.

It’s why I’ll be a watchdog for your money, not a lapdog for the insiders. 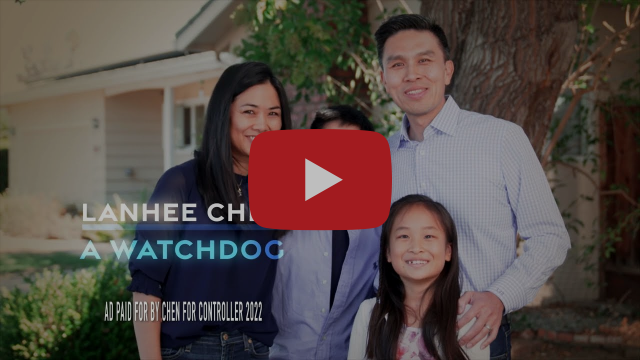