Why Won’t Malia Cohen Debate? Because of Her History of Favoring Lobbyists Over Constituents

Mountain View, CA – Today marks 41 days since California State Controller candidate Lanhee Chen challenged his opponent, Malia Cohen, to a series of debates discussing what each would do as State Controller. Cohen has failed to respond.

“It’s no surprise that political insider Malia Cohen is refusing to debate the critical fiscal issues facing our state given her long history of cozy dealings with lobbyists and failure to consistently show up for work. California taxpayers deserve a Controller who will defend them and look out for them first,” Lanhee Chen said. 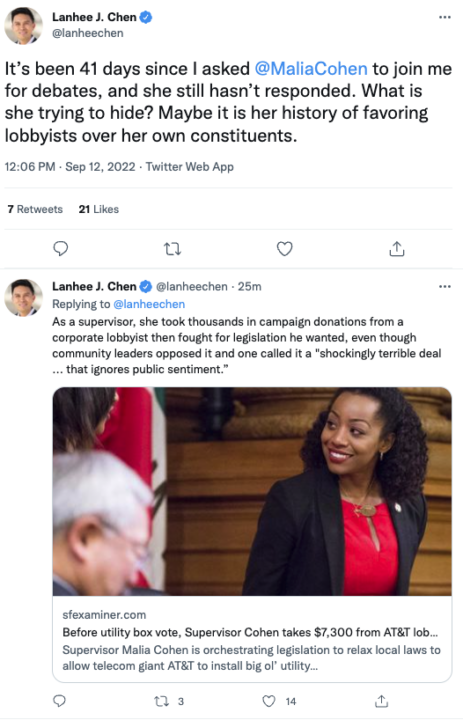 “Supervisor Malia Cohen is orchestrating legislation to relax local laws to allow telecom giant AT&T to install big ol’ utility boxes across San Francisco, but her palms are being greased by lobbyists ahead of a key vote on the issue.”

“In what I’m sure is a perfectly wholesome, totally and completely unrelated matter (cue innocent whistling), AT&T’s lobbyists have, just this month, donated $7,300 to Cohen’s campaign for the state Board of Equalization, according to her state filings. To be precise, that’s Lighthouse Public Affairs, whose coowner Boe Hayward is the lead lobbyist for AT&T as they’ve butted heads with The City for months on the telecom company’s failure to clean graffiti on its existing boxes within the mandated 72 hours.”

“Cohen’s proposal is set to make AT&T’s life easier by not only adding more boxes — the company is expanding its internet service across The City — but allowing the company to pay an “in-lieu fee” of only $500 when the boxes are defaced. The boxes would be someone else’s problem, much to the chagrin of angry neighbors, who consider them an eyesore. Notably, that cost is thousands of bucks below The City’s estimate to fix-up the boxes. “This is a shockingly terrible deal,” wrote Richard Corriea, president of the Planning Association for the Richmond (District) in an email to Supervisor Sandra Fewer in early June. “This proposed legislation ignores public sentiment,” Corriea continued, “obliterates the community protections found in current law and rewards utilities like AT&T in spite of failures to comply with current obligations.” So is she carrying AT&T’s water for their support? There’s plenty of muddiness here.”